(Above: Deviant Diety by Deanna Leamon. Click on image to enlarge.)

Vista Studios’ 13 artists will be participating in this year’s 24th Vista Lights celebration.

On November 19, 5:00-10:00 pm, galleries and shops will open the holiday season with evening hours. Come see our new exhibition and visit with the artists as they open their studios and discuss their processes. There are two new artists at the studios, Deanna Leamon and Kirkland Smith. Although they are new to Vista Studios, they are well known around Columbia as two of its’ finest artists. Come by and see their new studios.

(Above: Arms Akimbo by Deanna Leamon. Click on image to enlarge.)

Deanna Leamon has filled her new studio with figurative images, including Arms Akimbo. The inspiration for this piece is a certain kind of, nasty sort of, person. Head Study” will also be included in the show. “I’ve been working on heads for a while, everything you might want to express about being human can be done with the head,” says Leamon.

(Above: Head Study. Below: Red Head. Both by Deanna Leamon. Click on images to enlarge.)

Kirkland Smith has brought to the studio her new process for creating in assembling non-recyclable materials and post-consumer waste. Marilyn is a 4’x4’ portrait of Marilyn Monroe and is constructed from items we consume and discard daily. She will also include Sixty Minute Man painted in the classical tradition from live model.

(Above: Marilyn by Kirkland Smith found objects on panel. 4′ x 4′. Click on image to enlarge.)

Susan Lenz, fiber artist, will show five of the newest pieces in her Decision Portrait Series, which focuses on personal choices without value judgment. Each work is a xylene photo transfer on tea-stained muslin with hand embroidery. The stitched words and titles are meant to reflect the choices made by those depicted, as in the works, Recycler, Patriot, and Living with HIV and others.

(Above: Near the Point by Stephen Chesley. Oil on panel. Click on image to enlarge.)

Pat Gilmartin will be showing several new ceramic sculptures that she completed during the summer. Her most recent piece is called Baobab: The Tree of Life. Pat’s interest is in its fascinating form: a massive trunk with just a cluster of small limbs at the top that sometimes resemble roots.

David Yaghjian continues is figurative “semi-narratives” using acrylics, crayons, and chalk on paper. Among the new work that will be on exhibit will be Downward and Two Hats.

Sharon Collings Licata, sculptor, will include Rock Dove III as a continuation of a series of larger than life, but very quiet meditative bird sculptures. She will also exhibit Moon Goddess, which is an exploration into the figurative. Half Life size, it is of a reclining figure, face down with her hair flowing over her hands. 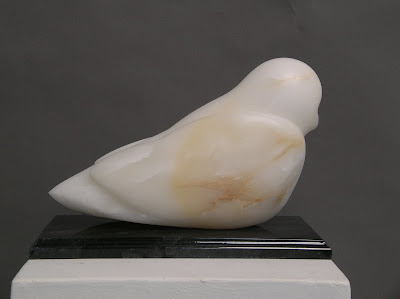 (Above: Rock Dove III by Sharon Licata. Click on image to enlarge.)

Artists Stephen Chesley, Heidi Darr Hope, Robert Kennedy, Michel McNinch, and Laura Spong will also present new work and open their studios at Vista Studios. The Exhibition will continue through November 30. Gallery hours are weekdays 11 a.m. to 3 p.m. and weekends 1 to 4 p.m. Please call the Gallery 80808 at 803-252-6143 to confirm hours.