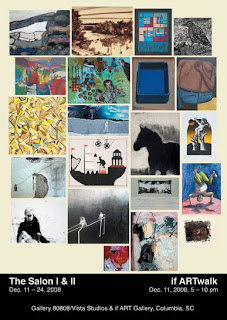 For its December 2008 exhibition, if ART Gallery presents The Salon I & II, an exhibition at two Columbia, SC, locations: if ART Gallery and Gallery 80808/Vista Studios. On Thursday, December 11, 2008, 5 – 10 p.m., if ART will hold opening receptions at both locations. The ifART Walk will be on Lady and Lincoln Streets, between both locations, which are around the corner from each other.

The exhibitions will present art by if ART Gallery artists, installed salon-style at both Gallery 80808 and if ART. Artists in the exhibitions include two new additions to if ART Gallery, Columbia ceramic artist Renee Rouillier and the prominent African-American collage and mixed-media artist Sam Middleton, an 81-year-old expatriate who has lived in the Netherlands since the early 1960s.

(Click on any image to enlarge. Above: Silvia Rudolf’s War Series (Horizon), 2007, oil pastel on canvas board.)

(Above: Jerry Harris’ Entering the Screaming Room, 2003, collage with acrylics.)

(Above: Anna Redwine’s Why I Am Irritated And It’s Not Because of the Weather, 2007, carbon on paper.)