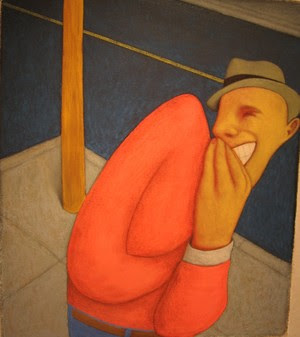 Jeff Donovan’s retrospective show, remaining on view at Gallery 80808/Vista Studios through Monday, January 18, re-established contact between the artist and some old friends.

Sure, patrons who have followed his work for three decades, as the show title indicates, braved un-Columbia-like cold for the show’s opening. But the works themselves were among the old friends Donovan was happy to see again.

“Fortunately, many of the people who have collected my work over these years are right here in town,” said Donovan, speaking from his studio where he was putting finishing touches on a few new pieces the last day of 2009, a week before his show was set to open.

The thought-provoking name of the show – “Three Decades/Twenty Years” – is a footnote to Donovan’s early years as an artist, with a decade-long hiatus during which life sidelined his art.

As he prepared for this show and he went back through his sketchbook, though, the artist was surprised at how little had changed since the beginning. “When that decade elapsed, I picked up where I left off,” but he noted even during that decade, doodles serve as evidence art was still stirring within him.

Painting what compels him, sometimes described as quirky, he believes his ability to be, and remain, “his own artist” can be credited to his decision to earn his living outside the periphery of art.

Although he knew from an eighth-grade playground epiphany that he art, beginning with art school was in his future. And although he did study at Ringling College of Art and Design, he paid the bills by working in construction until those building skills, coupled with his artistic ability, were parlayed into set building in Carl Copeland’s scene shop behind Dutch Square Mall.

Now his “day job” is with ReNewell, Inc., the Columbia art conservation business of Ginny Newell.

“Work, although related to art, relieves my art of that burden, freeing me to paint what I feel, not catering to anyone else’s view of what art should be.”

The nonchalance has worked. Donovan’s “own thing” has been rewarded by a dogged cadre of followers and collectors, some willing to allow their pieces to join the artist again for the duration of this winter show.

The reception for the presentation of IfArt’s show catalog is set for Monday evening, 7-9 p.m., January 18 at Gallery 80808/Vista Studios.