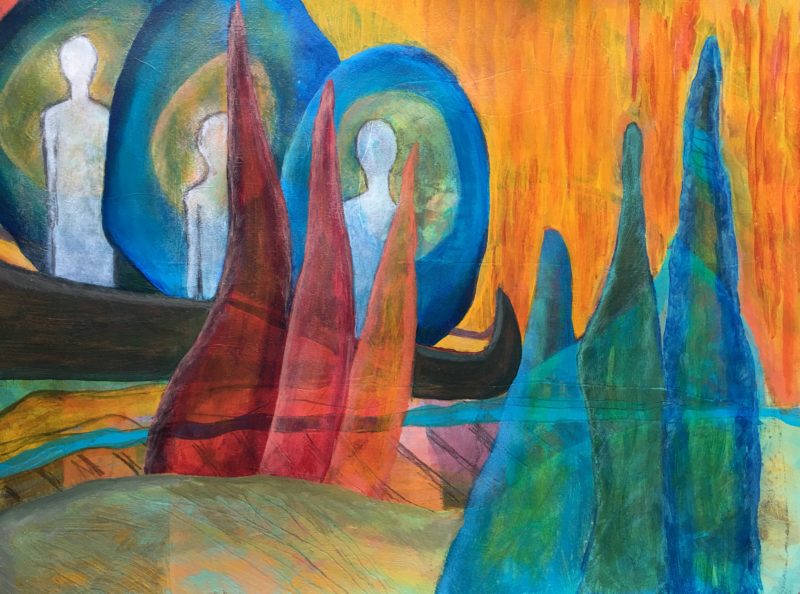 A solo exhibition by Heidi Darr-Hope

In this series of colorfully vibrant paintings and mixed media works, Darr-Hope explores the fortitude needed for inward travel and the determination it takes to continue the journey.

Closing Reception
Thursday November 11th from 5:00 – 7:30.
Artist Talk: 5:30
Darr-Hope has invited two talented jewelers, Ruth Bayard and Nora Floyd, to join her for the last 3 days of her exhibition. Their ethnic inspired amulet-like creations  speak to the themes found within Darr-Hope’s work. 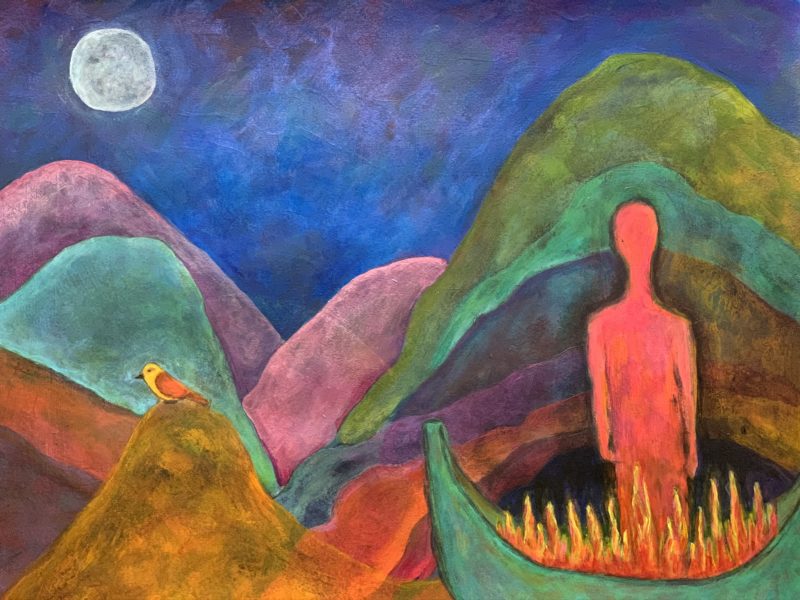 Serendipitously, the angst and the existential contemplation of Covid-19 are punctuated by moments of comforting grace that unexpectedly fold into the constant global suffering. Forced isolation naturally evoked a state of turning inwards, a time of self-reflection. When out-of-the-blue life unravels, we are forced to summon courage to begin again, to dare bravely, discovering fresh perspectives so we can start to live within our new reality.

I am comfortably lost. Comfortable because I have faith in the process of artmaking as She has never failed me. She assists me in understanding my life and our unpredictable world. Living within this shattering crisis is hard to sort out but is nudging me towards a greater acceptance of the uncertainties of life, my inevitable mortality, and what matters most.

Strangely, many of these works were started a couple of months before the pandemic. Unsure of where She was leading me, I trusted the process and kept painting. I am now living into the story these images are telling.

It is my hope this series of works, Daring Bravely, will inspire you, individually as well as collectively, to dream of a future world we will all create together.

Alone, yet together
longing for a new world,
a new vision of who we are,
of who we can become,
we dare bravely
into constant slow movement
elaborately unearthing
our unique oneness
within the complex web
of what it means to be human.

You can find out more about her at https://www.darr-hope.com/ and her teaching at http://www.healingicons.org/

Having worked as a professional artist for over 40 years, Darr-Hope has accumulated many accolades.  Talented Tabitha Safdi, who produces, films and edits South Carolina’s Educational Television’s series, Original SC,(click to watch) created a wonderful 5 minute on-point portrayal of who she is and what she does.Born, raised, and still living in Columbia, South Carolina, she will point out quickly that her roots are not there like her husbands are.  Her ancestors were explorers who landed and went west, all the way to California. She has that same wanderlust.  There is always too much overflowing on her plate and her husband of over 40 years has been her rock in the juggling act.  Both of their children are wonderfully married, and they have four of the most marvelous grandsons imaginable.

Darr-Hope’s schooling (MFA, University of South Carolina, BFA 1982) has been punctuated not only by intensives at Penland School of Arts but also by studies in myth, world religions, Jungian psychology, and nighttime dreams.   Her insatiable curiosity fuels her  creative process.

Artists that have influenced her – oh the list is long.  I’ll start with ones you might not know. Meinrad Craighead for her images of God the Mother and her praying with images series.  Maybelle Stamper for her personal mythology and subjective expression of the natural world.  Remedios Varo for her deeply intuitive portrayal of the interconnectedness of all things.  These women have inspired and encouraged her journey through art.

To recognize outstanding achievement and contributions to the arts, the SC Arts Commission annually presents the South Carolina Governor’s Award in the Arts, the highest honor the state gives in the arts.  She was humbled to receive this in 2011.   That same year she was awarded The Palmetto Center for Women’s Twin Award in Health and Wellness. Since 1980, this distinguished honor, Tribute to Women in Industry, has been given annually to women whose outstanding achievements mark them as leaders and role models in business and in the community.

Her work’s been exhibited and collected around the globe and is influenced by her enthusiastic passion for travel, her quest to understand her nighttime dreams and her longing to find the quiet in the roar. Her creations have found homes in over 30 national and international corporations such as Coca Cola USA, Bell Communications, Home Box Office, and Marriott Corporation.   Locally, Palmetto Health, The Palmetto Conservation Foundation, The Columbia Museum of Art, The South Carolina State Museum as well as The South Carolina Arts Commission.  Art lovers in Philadelphia PA, Washington, DC, Houston, TX, Atlanta, GA as well as throughout the Southeast live with her work in their homes.