An Exhibition of the Hemlocks Retreat Artists

Posted February 20, 2013
Facebook
Twitter
Pinterest
Linkedin
Facebook
Twitter
Pinterest
Linkedin
02/28/13-3/12/13
An Exhibition of the Hemlocks Retreat Artists
For the last eight years the artists Eileen Blyth, Brucie Holler, Louanne LaRoche, Laurie McIntosh, Lynn Parrott, and Jan Swanson, have spent a week sharing their love of art at Hemlocks Studio in Cedar Mountain, NC. This is the second exhibition for this group at Gallery 80808. 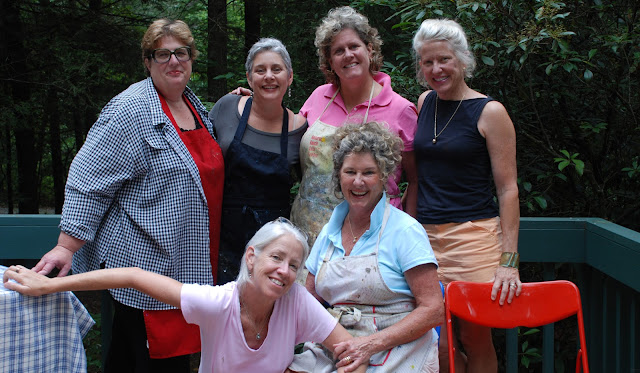 The History
In 2005, sisters Lynn Parrott and Laurie McIntosh participated in a class together at the Penland School. They had such a wonderful experience painting together that they decided to invite other artists they knew and respected to work with them in a group situtation. The first time they put this idea into play was in 2006 in Lynn’s garage on Hilton Head Island.
After two meetings in Hilton Head the group moved to the mountains where they could work and paint at Hemlocks Studio in Cedar Mountain, NC. The artists participating were still quite fluid at this point but over the next couple of years a core group of six artists remained in place. Six is a nice number in the studio and through the years their creative spirits learned how to work with and around each other.
Eileen Blyth, Brucie Holler, Louanne LaRoche, Laurie McIntosh, Lynn Parrott and Jan Swanson gather at this mountain retreat every fall to work, replenish friendships and share their lives with one another. They dance, cook, share books and music, inspire and influence each other over a few beers or a glass of wine and paint from morning to night.
The Artists
Louanne LaRoche
LaRoche has lived in low country since 1977. She is the former owner of the Red Piano Galleries. Her art reflects a significant sense of community, and her response to these connections, as they are being lost, displaced, or diminished. She continues to experiment exploring the relationships of color, texture, and creating new perspectives and nuances of feeling. Her work has been collected and exhibited internationally.
Statement
“There is a communion of spirit between an intimate glance towards a gesture, event or place and the process of documenting this relationship on paper or canvas.
“This yearly mountain retreat is a place for our creative confluence. Our time together provides bounty for each………. fueling the flow of our artwork and constancy to friendships.”
www.larochecollections.com 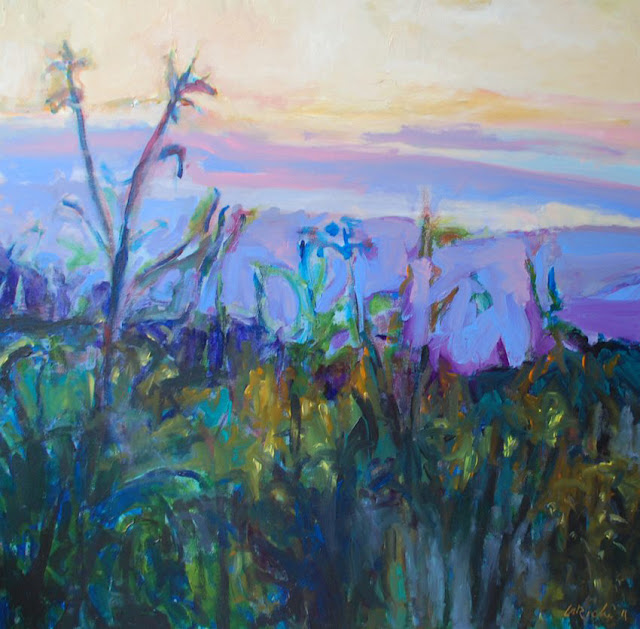 Caesars Head Mountain                             40×40                                                 mixed media
************************
Brucie Holler
Holler, a South Carolina native, received a BFA in painting from Florida State University and did graduate work at the Maryland Institute, College of Art in Baltimore. She then moved to Telluride, Colorado and worked for seven years teaching and serving as Director of Exhibitions for the Ah Haa School for the Arts, a non-profit art school. She has studied with a variety of internationally known painters including Richard Smith, Mario Martinez, and Truman Lowe among others and has shown her work in galleries in Florida, South Carolina and Colorado. She moved back to South Carolina in 1997 where she maintains a studio.
Artist Statement
As a painter, I am interested in exploring the idea of beauty and my response to life through nature, symbolism and an investigation of the interior landscape. Whether I am working in abstraction or representation, I am interested in creating spaces and moments of contemplation that are inspired by personal experience.
“This retreat “has really become about the friendships for me. The work is almost second. My friendship with everyone in the group has become more precious, deeper and very special to me. And the two things…work and friendship – are so intertwined that my mountain work cannot be separated from these friendships. It seems that my work resonates with this love that I feel for everyone. I almost don’t want to share the art work publically because it just means something different.”
http://www.brucieholler.com/contact.html 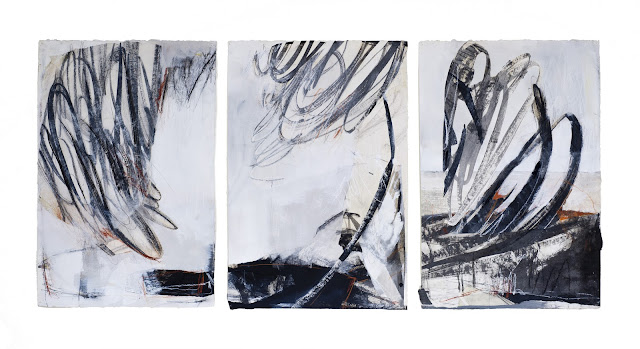 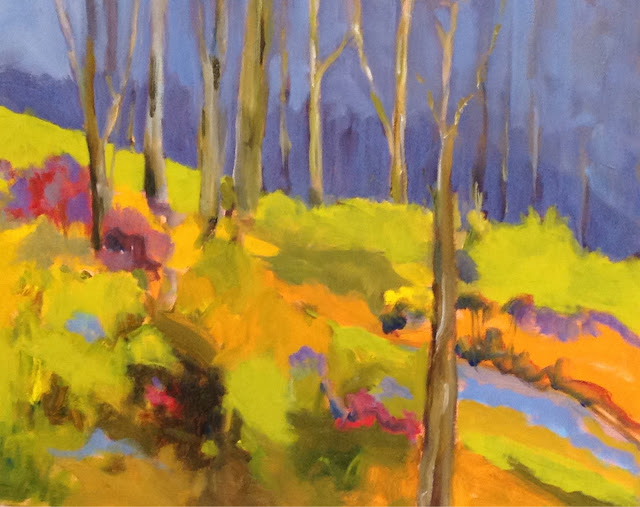 Pink Stripe Trunks         6″ x 12″               oil on board
************************
Jan Swanson
Swanson is a mid-century, self-taught artist from Asheville, NC, working mostly in oils, but also doing acrylic/collage paintings with found objects and papers.  Her work is usually colorful; sometimes humorous. She is a graduate of Clemson University and has attended classes at the University of South Carolina as well as Penland School of Crafts, Anderson Ranch and Arrowmont School of Arts and Crafts.
Statement
My paintings usually depict things that aren’t quite right. Many times there will be objects falling off of tables, or crooked chairs and windows. The spots may fall off a woman’s dress. Some of my recent paintings have cigarettes in them. I don’t feel right about a painting unless there is something amiss.
“I am the most recent addition to the Hemlocks’ Retreat group having started in 2004.  After a trip to San Miguel, Mexico with two of the group’s members, Laurie McIntosh and Lynn Parrott, I guess I was somewhat indoctrinated into the circle. I also showed everyone’s work at the Bus Stop Gallery in Columbia.  The group has given me so much confidence and enabled me to show my work at Camellia Art on Hilton Head Island. Each member is always willing to provide constructive criticism and I always look forward to our retreats. They are one of the highlights of my life.”
http://www.camelliaart.com/GalleryMain.asp?GalleryID=83801&AKey=G4XBG589 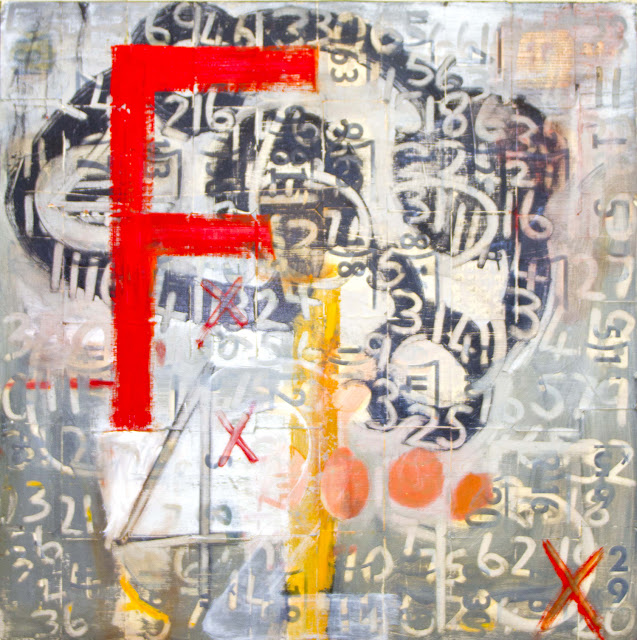 Math Is Not My thing               34X34                              Mixed media
************************
Eileen Blyth
Education-College of Charleston – BA Studio Art- University of South Carolina – Graphic Design
Studio location: Studios in the Arcade,  Columbia, S.C
Statement
“There are times when I have an idea in my head of how a painting will go. Usually, as I work, a completely different thing happens, as if the paint had a whole different plan. Somewhere between building the surface and making and erasing marks there is a shift. It is that moment of knowing, of seeing that shape or line, of finding the composition that is the exciting thing for me.”.
“To be able to remove ourselves from our everyday studio life and be together for this capsule of time has become a vital part of my growth as an artist.”
http://www.eileenblyth.com/ 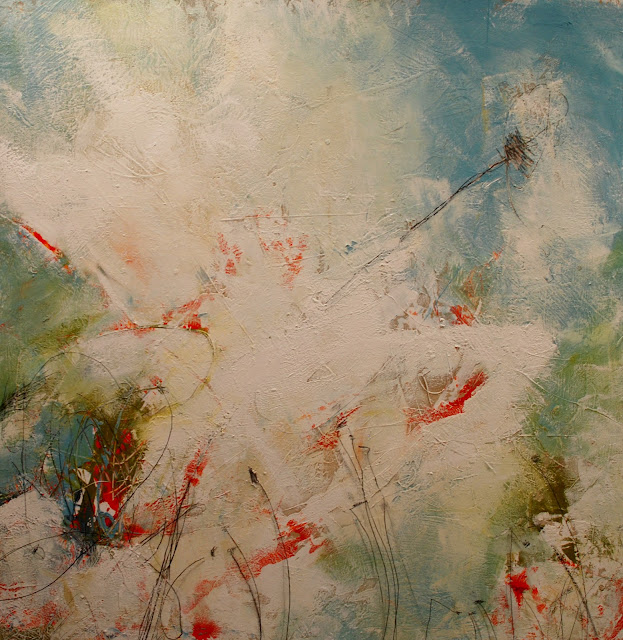